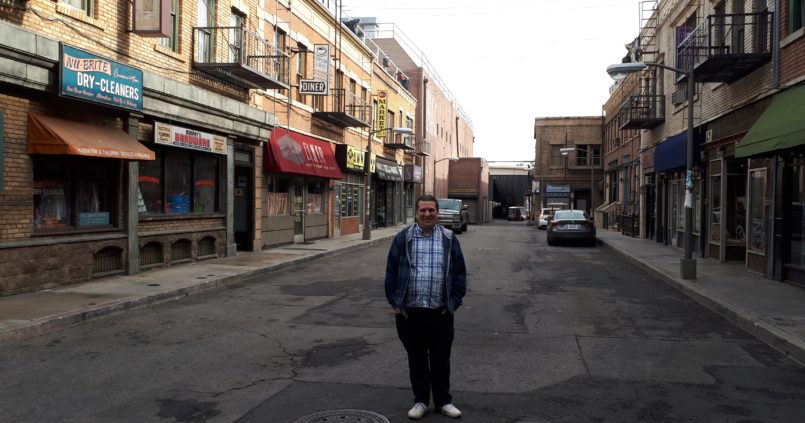 Seinfeld is one of those TV shows that has become part of our culture.  Not many shows can claim they have added words and phrases to our every day language.  It is nearly impossible to find a time of day when some channel isn’t still showing Seinfeld reruns.

The Seinfeld pilot was filmed at Red Studios in Hollywood.  Once the show was picked up for a 1st season, the production of the show moved to CBS Studio Center (often referred to as CBS Radford) in Studio City.  The first three seasons were filmed on a smaller stage, before moving to a large stage for the remainder of production.

Seinfeld featured a lot of shots filmed along the streets of New York.  However the show never actually filmed in NYC. CBS had a small New York Street backlot which was used for numerous episodes.  During the show’s run, a larger street was constructed to accommodate the various scenes filmed. Between small cosmetic changes and a variety of camera angles, most viewers didn’t catch on that it was always the same street.

This street still exists at the CBS studios, and has been used for a number of productions over the years.  The street can now occasionally be seen on the ABC show, American Housewife.

CBS Radford also has a small residential street, which includes a small green area, which was often used on Seinfeld for scenes in Central Park. It’s not a big lot, but with some added trees and benches, it can look just like a park.

As the NYC street at CBS Radford is quite small, scenes were sometimes filmed at other Hollywood studios.  One well known episode that was partially filmed at Paramount is the Rye Bread episode. The show included a scene where Kramer takes Susan’s parents for a ride on a horse and carriage (RUSTY!!!). Meanwhile George tries to raise a loaf of rye bread up to the 3rd floor using a fishing line.

In the series finale, the episode begins with the gang witnessing a mugging in a small town. With nothing fitting at CBS Radford, the production moved to Warner Bros. and their Midwestern Square. The storefronts and the gazebo made the perfect setting for this scene.

While the show was never filmed in New York, the show often used establishing shots of buildings in the area.

The most famous location is Tom’s Restaurant at 2880 Broadway, in the Morningside Heights area of Manhattan.  The exterior of this location was used to establish shots for Monk’s Restaurant, the diner featured in almost every episode.  “TOM’S” on the sign TOM’S RESTAURANT is always cropped out of the shot to show only the word RESTAURANT.  The sign hasn’t changed since the show was filmed, making it a very popular spot for fans of the show.  I did have the chance to eat at the diner. While the inside doesn’t resemble the set at all, the food was good and the prices were decent.  I’d recommend grabbing lunch if you can, just to say you’ve eaten there.

Another very popular spot is Soup Kitchen International. This shop and it’s owner, Al Yeganeh, were the inspiration for the Soup Nazi episode.  The shop is located at 259-A 55th Street in midtown Manhattan. The shop itself was not featured in the episode, as a shop on the CBS backlot was used.  However, due to the fame of the episode, it is a very popular spot for fans of the show.

The Nexus of the Universe

In the 9th season episode “The Maid”, Kramer gets lost and finds himself at the intersection of 1st Avenue and 1st Street. He calls Jerry for help, and describes the area as The Nexus of the Universe, unable to understand how a street can intersect itself.

This is a real intersection in Manhattan, and even has a bar known as The Nexus Lounge on the corner.

Numerous other spots in NYC have been used for establishing shots in various episodes. While I won’t detail them here, there are a number of fan sites that have meticulously tracked down these locations.  I encourage you to check them out.

While this site is a hobby, it does cost me out-of-pocket to keep the site going. You can help support the site by clicking the link below and shopping on amazon. Thanks for all the support!

Processing…
Success! You're on the list.
Whoops! There was an error and we couldn't process your subscription. Please reload the page and try again.
Follow me:
Share with your friends:
Posted in TV Shows